One thing's for certain, the annual Daily Express' doom laden forecast of the 'worst winter in 500 years' hasn't come true.

Here in the Dark Peak we have seen a fair amount of the white stuff, but it's character has been a sudden dumping, settling on high ground typically over 400 metres, followed by a fairly rapid thaw. 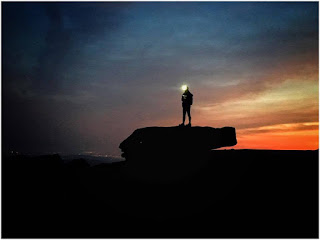 In November, Ranger Ultras organised the inaugural Peak South 2 North Ultra over two stages. Saturday's White Peak trails stage was run under blue skies in crisp fresh air. The pin sharp light made a perfect showcase for the limestone dales and vales. Sunday's Dark Peak Challenge could not have been more different. Overnight, an un-seasonal early snowfall left the course covered in several inches of snow, with deeper drifting just off the trail. 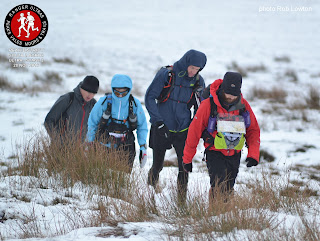 Prior to the start Race Directors, Stu and Peter, took the decision to omit the more wilderness elements of the event. We considered the modified course (following the Pennine Way over Kinder Scout, Bleaklow and Black Hill, then down into Marsden) difficult enough under snow. Most of the entrants were also Spine Race competitors, so they were very happy to have a route which gave them a complete reccie of the Dark Peak section of The Pennine Way as part of their Spine build up.

Supporting the Peak South 2 North, we had a superb team of friends and volunteers, many of whom are Mountain Leaders. Safety teams were positioned at each road head, with hot soup and food for racers as well as being ready to help any racer in need on the course. (We look after our volunteers equally as well as racers. So every volunteer in our events receives a personal free entry into one of our later races or stages) For additional safety monitoring, each racer carried a tracker from Legends Tracking:   http://www.legendstracking.com/ 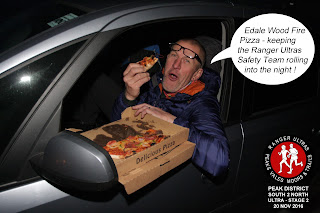 From a race director's point of view, it is always the wish for racers to be engaged in ding-dong battles all the way to the finish line. Indeed, just like what we had seen a month earlier on our Ranger Ultras, Yorkshire 3 Peaks Ultra, where Richard Lendon and Tom Hollins had pushed each other to the limit all the way up to the last 200 metres. At the final field, where there is a narrow path where to overtake would involve unsportsmanlike barging, they agreed that if they were within an few metres of each other they would rock into the finish at Hawes as joint winners. But this was no soft option joint finish. When I greeted them at the finish line they were truly a sight. Battered, bloodied and bruised, they sat down and like a double act, without pausing for breath, told me the whole story of their race. Their faces beaming with wide smiles. 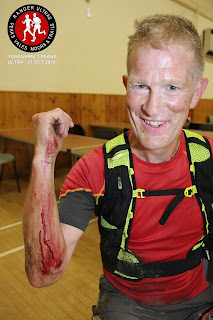 A couple of months later, Tom went on to win the 2017 Spine Race in a inspired strategic, go big or go home, finish along the Cheviot, overhauling previous winners Pavel Paloncy and Eugenie. He would never describe himself as such, so I'll say it here. In those final miles, Tom became a Spine Legend. 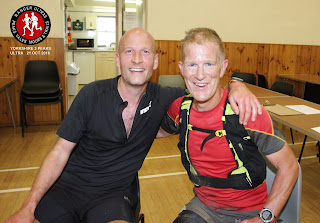 The PS2N Stage 2 story was very different yet no less satisfying from a Race Director's perspective. Among the racers was experienced International Mountain Leader, Paul Gale, elite ultra runner Jenn Gaskell and several competitors who had joined our Ranger Ultras Complete Racer Training Days. By the time they had reached the A57 it became very clear that the race had become an expedition of attrition. The field had combined into two distinct groups, each with team members taking turns to break trail, navigate and check navigation. As they approached Snake Pass, it was a superb sight to see the bonds of camaraderie, forged out of adversity, with everyone working towards the common goal. 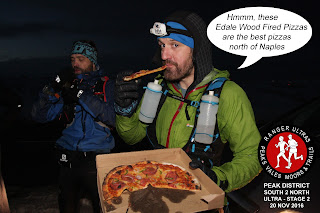 We had hired the Parochial Hall at Marsden until 22:00 on the Sunday, thinking this would be a very generous time for racers to complete the course. We were glad we had, as the second group took some 13 hours to complete. Every racer arriving felt it was truly an epic adventurous day out.

To help racers prepare for Y3PU and PS2N Ultras, our Complete Racer training is available:
http://rangerultras.co.uk/index.php/complete-racer-training/ 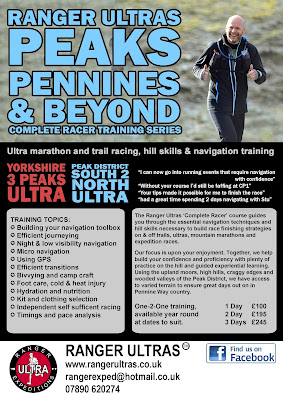 During the autumn and early winter, as official training provider for The Montane Spine Race, we welcomed many runners to our Ranger Expeditions Complete Racer events and one-2-one training. The courses look at all aspects of the Spine Race, drawing upon 6 years race history as well as remote expeditions and competitive racing. We investigate the factors contributing to success - i.e. finisher's medal - and the reasons why so many racers DNF across the whole spectrum of entries. Navigation is a major concern for potential racers, so we dedicate penty of time to skills and practice. Our courses have helped many Spiners journey with greater confidence and proficiency. The Complete Racer approach has raised awareness of important aspects of strategy which racers have often not devoted sufficient attention. 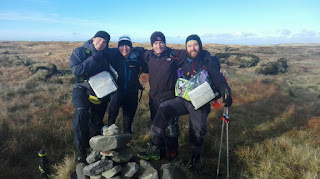 A few words from our Complete Racer participants....

"A big thanks for all the help and tips that made it possible for me to finish the Spine race...wow what a journey and at times it didn't seem possible but I did it. Cheers"

"priceless advice on your masterclass. Really helpful, thanks" 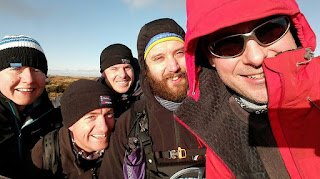 2017 also brings the first 'summer Spine' Fusion and Flare races, for which we have the following training event:
http://rangerexped.co.uk/index.php/spine-fusion-flare-training/

The mild winter had confounded my best efforts to match location and timing with a excursion into the white playground. During my annual stint on The Spine Race as Safety Team Coordinator I had arranged a few hours of down time with fellow Safety Team crew at the Auchope Refuge Hut on the Cheviots. But the weather up there was like summer. It looked like a planned trip to Chill FactorE in Manchester might be the only snow I would make contact with this winter. 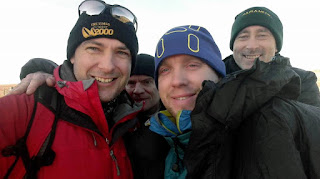 So to my delight, last Sunday, the forecast looked promising. From my house I can't quite see Kinder, but by midday Mount Famine had a dusting. I threw some kit into my Millet ProLighter sack, pulled on a pair of salopettes and decided to test drive the Montane Flux Jacket given to me by the race sponsor at The Spine. 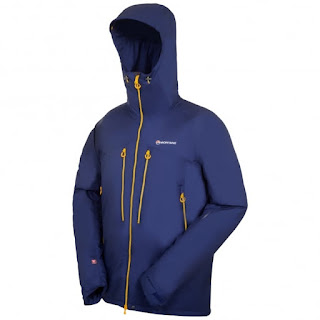 Worn directly over a base garment, the Flux jacket felt a generous enough fit so that if I wanted to wear another layer underneath it would still be comfortable. As I ascended Sandy Heys, the spin drift started to sting, so I swapped my wrap around sunglasses for proper ski goggles. Combined with a buff to protect my cheeks and nose, the Flux jacket hood made a good barrier and closure against the freezing ice crystal missiles. Cresting onto the Pennine Way wind gusted over the edge of the Kinder plateau blowing drifts across the trail. It was time to get a shifty on. 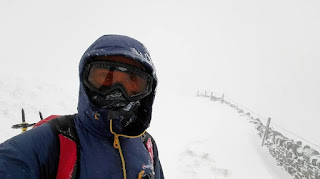 Moving at a brisk pace was sufficient to generate enough heat to feel comfortable in the Primaloft Silver insulated Flux. When blown against the jacket, it shed the snow without soaking into the fabric. Of course, this was a first excursion for the jacket so its water repellent surface treatment was at it's optimal newness. I fully expect to have to regularly renew with treatment products to maintain this level of performance. However, in these conditions a insulated jacket such as the Flux would never be my ultimate protection against weather - in my rucksack I also carried a shell jacket in case the falling snow turned to sleet or heavy rain.

As I progressed along the Pennine Way, I mentally ticked off the features memorised from the many previous walks on Kinder. Of course, map, compass and GPS, were carried in case of total white out, but I could see enough of the way ahead, through the flurries and greyness, as well as the contours to be confident I was on track.

A quick stop for hot black coffee and Eccles cake among the sheltered rocks above The Downfall. Past the Red Brook re-entrant. Taking care not to let the pull of gravity take me too far westward. The large cairn at Kinder Low, tick. Follow the faint flat impression of the trail in the snow in a southerly direction looking for the slabbed branch to Swine's Back. West of Swines back a drift had accumulated nearly up to the top of a dry stone wall. I chuckled at the enjoyment of being the first person to wade through it. 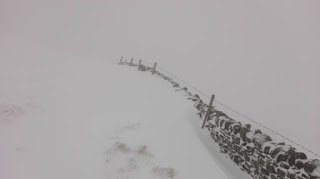 Descending down the Oakden Clough bridleway, I reflected on the micro-adventure with satisfaction. I hadn't seen anyone since ascending Sandy Heys. The experience felt visceral and good for the soul. The Monane Flux Jacket had done everything I wanted from it. At 400 metres ASL I dropped below the snow line, pulled off my goggles and unzipped the hood.

No time to pause though, there was a fresh black coffee with my name on it at The Sportsman Inn, Hayfield. 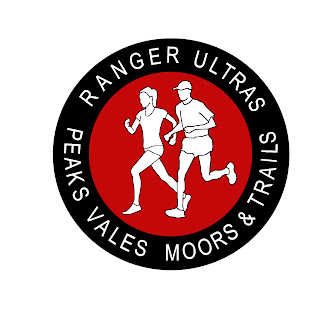 Posted by Stu Westfield at 14:28 No comments: