Some days all you need is a nice day on the hill. I looked out of the window this morning and saw fresh spring colours under a rich blue sky. Decision made, I threw a few items into my rucksack, fed Rafa, put on his overcoat and set off.

The Kinder Round, from Hayfield, offered a straightforward route to blow away some cobwebs. A pause for coffee at the William's Clough footbridge. I poured an Africafe from my flask, strong, dark, no sugar. Offered a silent thank you to my pal Darren for re-supplying, having brought a big tin back from leading ion Kilimanjaro a few weeks ago.

I paused, savouring the aroma. It kindled happy memories of my previous expedition for World Challenge to South Tanzania. Circumstances meant I wouldn't be returning to the Old Country this summer. Enough introspection, saddle up and I pushed on at a brisk pace up Sandy Heys. 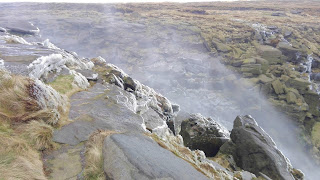 A strong southwesterly gusted across the trail when we crested the gritstone edge of the Kinder plateau. Rafa and I jogged onwards. As we approached the downfall, there was the iconic plume of water being blown back upwards. The Dark Peak's very own Mosi-oa-tunya! 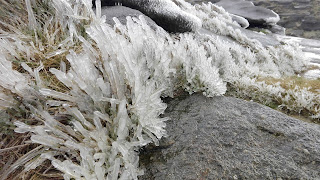 Closer to the waterfall, the canyon created a funneling effect so that the spray became super cooled, sticking to grass and moss, creating vertical icicles. 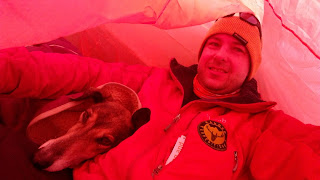 Above, dark clouds had built up and the odd hailstone pinged off surrounding boulders. Rafa and I retreated to the leeward side of a small bluff and pulled the emergency bothy over us just as the hail intensified. Underneath we were warm and comfortable. I sipped another coffee, Rafa crunched some biscuits and layed down for a rest.

Shower gone, blue skies returned, we jogged southwards, past Red Brook re-entrant, the trig point and towards the bronze age tumulus. Here we deviated off the slabs, descended a few metres and contoured around Kinderlow End. Our Kinder Surprise for the day was to find the elusive and somewhat fabled Kinder Cavern, or as it's more properly known in the caving community as The Belfry. 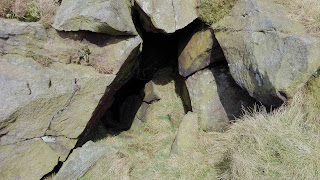 In the Geological Survey 1887, there is the following description...
"Kinderlow Cavern is not easily accessible. The entrance is through a fissure nearly vertical, and it is likely that the cavern itself is a large rent caused by the rock having parted along a joint end slipped slightly forwards. Appalling legends prevail in the neighbourhood of rash explorers who have lost their way and been imprisoned for a whole night in the cave."

The 'rash explorers' are likely to have been two local men, whose escapades were published in the Manchester Evening News in 1843...
A search party soon set off headed by the anxious uncle, the party armed with ropes lights and all that was necessary to unearth the wanderers if they were found at the place mentioned. To return to the cavemen they awoke at last from their long sleep and the first sound they heard, possibly, it was that which awakened them, was the halloo of the rescuers.

It sounded to faint for the two men to be sure of this, but they both shouted out together with all their strength and were rejoiced to hear a reply, louder this time for they were wide awake now. It did not take long to get them out to the light of day.

Billy said he felt very foolish and he would never forget how ‘th’ ester’ first looking at them ‘dreeply’ tapped his snuff box twice, then taking a long pinch said “Well have you had enough.” They had been in the cave 21 hours.

There are also stories of the the cave entrance being blocked up with timber by game keepers. And of there originally being two separate entrances. 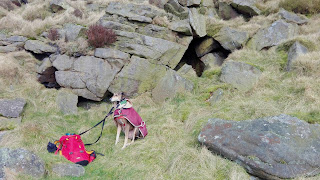 I located the vertical fissure. Rafa settled down on a patch of grass outside while I shone a torch into the first vesibule of the cavern. The structure did indeed appear to have been formed by an ancient slip. At the rear of the first vesibule a shaft of natural light shone through a gap in the ceiling. Looking to the right there was a shaft leading down into darkness. This is cavers' territory and certainly not for the unaccompanied hill walker. So I left, content with a couple of photographs and having found what could be the infamous Kinder Cavern of local legends. 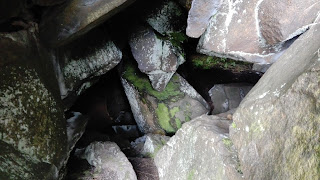 If you would like to experience Kinder Surprises and guided adventures, get in touch with
local Mountain Leader, Stu Westfield from Hayfield.  Email: rangerexped@hotmail.com
Ranger Expeditions

A fully supported and guided big day out on the hill, including transport to the start point and low cost accommodation options. We are offering our 6th May 2017 Peak District 3 Peaks Challenge at superb value prices: £60 walk including 2 nights Bunkhouse accommodation. £30 walk only. 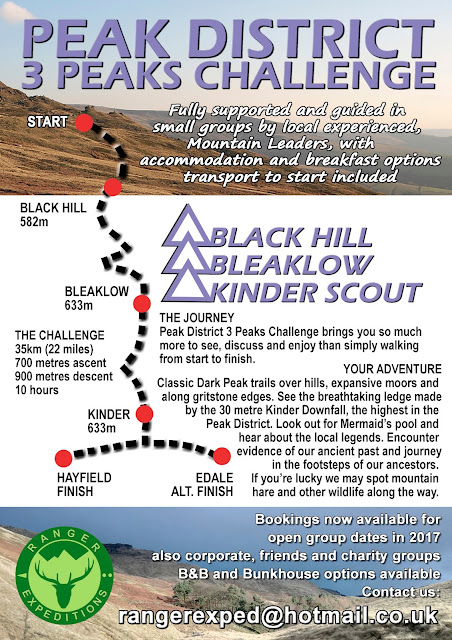 Posted by Stu Westfield at 15:12 No comments:

Waiting for the late flight back to Manchester, after Joop De Wel had kindly given me a lift back from the Ardennes.

I strolled up and down Terminal B. Coughed at the ridiculous price of Talisker. 60 Euros a bottle! It's supposed to be duty free! So I bought some Belgian chocolate champagne truffles and a bottle of Amarula cream instead.

I had plenty of time to reflect upon the weekend's action on The Legends Trails race. There was never any doubt that this year's second edition would not live up to the racing adventures set by the 2016 event. Race Directors Tim De Vriendt and Stef Schuermans had invested significant efforts into The Legends. Several racers had returned, either to wipe clean the record of previous DNF, or with their sights on being the first legend of 2017.

In the HQ too, there was a great mix of experienced volunteers and new faces. The traditional spirit of camaraderie was felt by all as the race machine started up, first with registration, kit check and then medical check by Dr Geert Meese and his superb team. Wim Bastiaens and Patrick De Kunst, both safe hands from previous Legends events, joined me as Safety Team coordinators. Sadly no Deiter Van Holder this year, he is working in Iceland as a mountain guide and having good adventures there too.

A new feature for the logistics team this year were team managers, Joop Werson and Kurt Demets. The logistics and safety teams did a superb job. Often to holes crossed over, both teams helping each other where possible with the common goal of another successful race.

Joop De Wel and Mich Van Deun looked after the Legends racer tracking system, providing quality data and visual displays for the race organisation and spectators in the common room.

This year, both in the weeks prior and during the race, the weather was much milder. The trails had not suffered from several weeks of rain and then days of snow melt. That said, the conditions were far from easy, with several squalls of gusting wind and freezing rain blowing through. In 1944 the Ardennes winter caused the 101st Airborne considerable problems. Today, the terrain remains largely unchanged. 2017 finisher, Allan Rumbles, said for the Legends course if a racer could change shoes to suit the ground underfoot, he would need a dozen types of trail shoe, further emphasising that attrition on the feet is a significant factor.

Forests cover the region. Mature densely planted pine forests effectively obscure sight lines and disguise contour features. Deep riverine valleys cut through undulating terrain and are overlaid by a cryptic matrix pathways, firebreaks and sketchy trails. Some of the Legends course follows way marked GR (Grande Randonnee) routes, some other sections follow Promenade Routes. However, these fall in and out of popularity and so may be overgrown. The frequent changes of direction and complex environment places a premium on navigation and route finding skills.

This years winner, Tuen Geurts-Schoenmakers, used only map and compass...and he still took 13 hours off the course record. But most racers do use a GPS to some extent. The combination of fatigue, sleep deprivation and cold caused a few competitors to have difficulty route finding even with a GPS - once again proving that whilst GPS is an important item in many racers' navigation tool box, it is not always the whole solution.

Also, for UK racers, the Belgium mapping system is very different to the Ordnance Survey we are used to...


In 2017 saw the first British finisher of The Legends. Ryan Wood rocked up to a very creditable 15th place. Allan Rumbles with his own brand of solid, relentless, forward progress toughed it out to 26th place, finishing to loud applause and several La Chouffre beers in celebration. 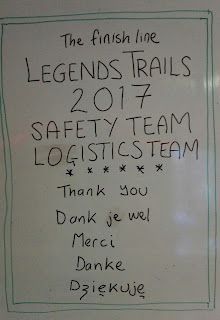 At 250km the Legends is the longest and most arduous, ultra challenge in the Benelux countries. In 2017 a total of 29 Legends were made from 61 starters. Willemijn Jongens and Sarah Johnson finished in 22nd place, proving that 'this girl can'.

The 2018 Legends Trails promises even more adventures, even more Legends. The question is, will you be there?

Posted by Stu Westfield at 15:49 No comments: