KINDER STORY OF A RIVER

The weather man said Storm Barbara is approaching and will hit over Christmas. Meanwhile, looking out across Hayfield village this morning, the winter sun lit up the rooftops. A fresh clear blue sky above, pin sharp, saturated colour. Just time to head out into the hills. 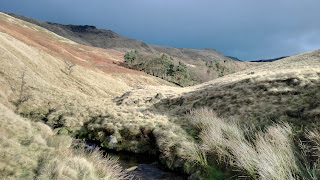 My proposal, for the first 'Discovery' level of The John Muir Award, had recently been approved. In a few months time the outcome of this project will be a short film (working title: Kinder - the story of a river). The film will showcase the geology and flora of the river, discuss current conservation issues and highlight my home village of Hayfield as a great base for outdoor enthusiasts to begin their Peak District adventures. 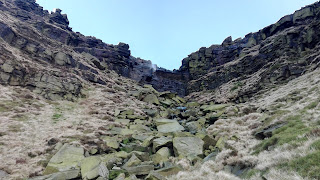 I saddled up my new Millet Prolighter 30 and took Rafa on a preparatory walk along the course of the River Kinder, from Bowland Bridge to just below The Downfall waterfall. We enjoyed a quiet afternoon, gradually ascending, until we reached a point just below the cascade of the Downfall. 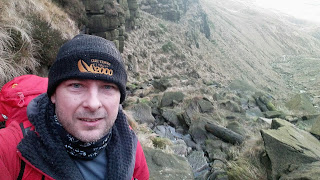 Along the way, I took some a selection of photos from which to build a shot list and narrative for the film. I was also luck enough to get to the Downfall on a day with a south westerly wind, which turns it into Kinder 'Upfall'. 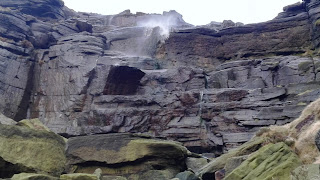 The ground was quite broken and the rocks slippy so I decided not to traverse below the waterfall this time. Rafa had been a good boy following my route, but was looking tired. We retraced out steps and meandered home where I had a nice cup of tea and the boy fell fast asleep on his bed. 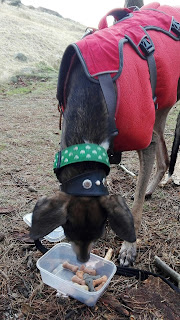 With over 15 years of service on overseas expeditions and in the UK, my old Berghaus Extem Guide pack is looking a bit frayed. I'm not quite ready to retire the old workhorse, a few stitches here and there will see it right for a while longer. For a while I've been looking at what's new on the market and to have a replacement in reserve just in case the Extrem Guide fails beyond repair.

Working as a Mountain Leader means I am more concerned about longevity than ultra light weight kit. Also, whilst I do generally believe you get what you pay for, I'm not going be shelling out thick wedges of cash either. I like the un-fussy alpine style packs with a single compartment. I never did use the lower zip on the Berghaus or the two compartment divider.

Features I look for are:


After a lot more searching than I had expected to do, I came across the Millet Prolighter 30. I actually saw it first on another walker, while I was guiding clients on Ben Nevis. I thought that it looked good and was a tidy design. A internet trawl and I acquired a red one from Tiso, reduced from £99 to £79. 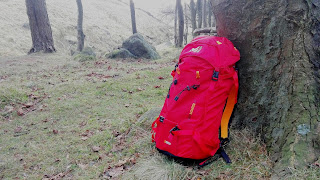 Today was the first test of my Millet Prolighter 30. Loaded with the usual items of emergency kit, water bottle, my food, Rafa's snacks and his spare coat, the pack felt comfortable and stable. From our fast walk in, along established trails, to following the upper reaches of the River Kinder across rough country and a spot of rock hopping near the Downfall, I was very pleased with its performance. Time shall reveal if it lives up to the apparent durability. But for now, if its good enough for the Chamonix Guides Company, its good enough for me.