Iceland may not immediately come to mind as a country of culinary delights. The local delicacies are certainly, shall we say, an acquired taste even for the most intrepid gastronomist. There's the traditional hákarl (fermented shark) with it's pungent ammonia odour. Best washed down with neat Brennevin schapps, for an equally direct assault with a hint of anise to keep you coming back for more.

Then there's slátur . If you think that sounds like slaughter, then you'd be correct. Slátur is made from the innards of sheep into something like blood pudding. However, there is so much more to food in Iceland than these unconventional headliners. Cattle, horses and sheep were brought to Iceland by Viking settlers. In the harsh climate, short growing season and with the prolonged winter gales, animal products originally dominated their diet. They were subsistence farmers who's stories, lives, loves, expeditions and feuds were later recorded in the thirteenth century Sagas literature. 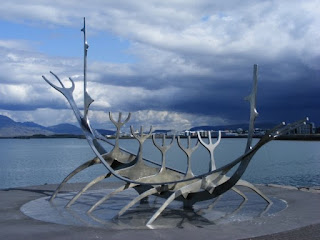 Vegetable cultivation increased, by necessity, during the 17th Century Napoleonic wars when merchant ships stayed away. However, vegetables did not become a significant part of the Icelandic diet until the 19th Century. The town of Hveragerði is renowned for harnessing geothermal energy from just below the thin volcanic crust, to heat industrial scale greenhouses and grow vegetable varieties which would otherwise be unviable at 66 degrees north. At sunrise the first light glinting off the multitude of glass panels can be seen from Route 1 several kilometres away. A local tour guide once joked with me that Iceland is the most northern banana republic.

Fish has been vital to Icelanders, from the early settlers to it's modern economy and not only from the obvious source of protein and oils. In the Saga era, animal leather was a scarce commodity so the Vikings turned to fish skin to make shoes. Journeys across the abrasive lava fields were measured in the number of shoe soles that would be worn out. Atlantic fish skin leather is currently experiencing a renaissance within the Icelandic fashion industry to make distinctive footwear, handbags and wallets.

The rich cod and herring grounds off east Iceland attracted the French fishing fleet from the 17th Century. This peaked during the 19th Century with over 200 ships and a French hospital maintained in the town of Fáskrúðsfjörður near Djúpivogur. Icelanders have for hundreds of years perfected preservation methods of air drying fish. For the observant traveller, the harðfiskur racks are still a relatively common sight. 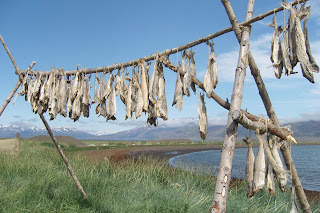 Unfortunately, the Icelandic trawler fishing fleet has reduced in recent years. Overburdened with toxic loan investments and escalating debt, many smaller operators were left with little choice but to sell their quota to larger outfits after the 2008 kreppa (the financial crisis resulting from the default of all three of Iceland's major commercial banks). However, fishing and in particular fish processing remains a major source of employment in Iceland and is especially crucial for communities which are more remote from the usual tourist destinations.

Domestic fish consumption in Iceland fluctuates according to shelf and market prices. But even when prices are high, with the exception of the Maldives, Icelanders remain the top consumer of fish per capita in the world. (Source: https://www.helgilibrary.com/indicators/fish-consumption-per-capita/ ).

In common with Scandinavian countries, eating out in Iceland comes at a premium and according to urban legend, you may need a second mortgage to enjoy a bottle of wine with your dinner. In reality it's not that bad. Certainly, if you're sitting in a swanky Reykjavik restaurant near Laugavegur, then expect to pay city centre prices, as you would in any European capital. 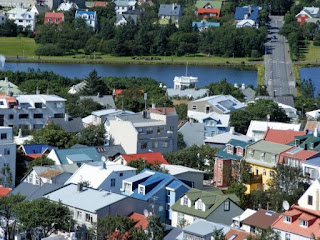 Much of the extra cost comes as a result of the price of living and the fact that most products and manufactured goods have to be imported to this relatively remote island in the North Atlantic. Take for instance McDonald's. I baulk at discussing good food and Maccy D's in the same sentence but stay with me one this. A few years ago there was a franchise in Reykjavik which initially did well. A franchise licence condition was that the franchisee bought all the menu ingredients from the overseas McDonald's supply chain. Then came the kreppa. The Kronur was devalued, import costs rocketed and profit margins were decimated.

Jon Gardnar Ogmundsson, a key figure in the Icelandic McDonald’s scene at that time, said,

“It just makes no sense. For a kilo of onion, imported from Germany, I’m paying the equivalent of a bottle of good whiskey.”
(Source: https://medium.com/better-marketing/why-mcdonalds-failed-in-iceland-769544c08898 )

The irony is that Iceland is really good at producing good quality meat, in conditions which are far more ethical than factory farmed animals. Soon after McDonald's pulled out of Iceland in 2009, the proprietor restarted under his own banner using more locally sourced ingredients.

International franchises don't tend to do well in Iceland. But then, why would you want to pour your holiday spending money into the coffers of tax dodging corporates, rather than savouring local flavours and supporting the community economy at its roots?

With a little extra shoe leather effort, or should that be fish leather, its not too difficult to find great quality places to eat at a moderate prices. Over the last 20 years, I have visited Iceland many times: As a hotel based tourist with Dolores (before her illness made overseas travel to arduous). Also organising my own self-led 4x4 adventures and as a professional expedition group leader. 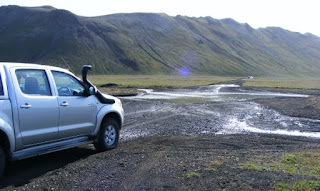 The following meals and recipes are all inspired by my journeys across the length, breadth and interior of the superb, the wonderful, the captivating, Iceland.

Fiskisupa:
Fish soup, hey ho, what's so special about that? Well, even though I do really like fish, when I first tasted this recipe, it was surely the best thing ever!

It was 2009, Dolores and I had taken the Toyota Hilux over to Iceland for a four week expedition.

The previous day, I had summited Hvannadalshnjúkur. A pyramidal nunatak, on the glaciated northwestern rim of the summit crater of the Öræfajökull volcano in Vatnajökull National Park. 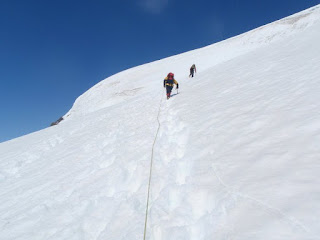 It had been a tough climb, from sea level to 2110 metres and back down in the same day, with climbing partner Tony who I rendezvous with at Skaftafell and Mountain Guide, Siggi. 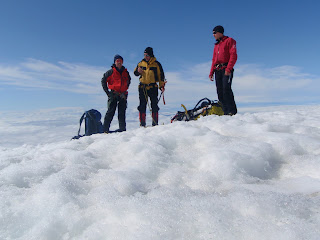 After a good sleep back at Kirkjubæjarklaustur Hotel (locally shortened to Klaustur) and with a equally good appetite, Dolores and I made a short drive up the road to Systrakaffi (Sister Cafe). Their soup was a feast for the taste buds, flavours of the sea combined with a lovely creaminess, which left me going back for a second bowl. 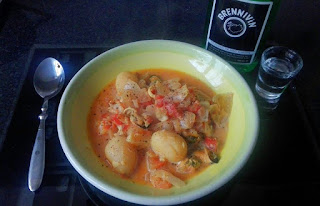 Plokkfiskur:
Fish Stew, this was another first. We had journeyed across the interior Kjolur F35 route to spend a few days exploring the north, the magnificent waterfalls of Goðafoss and Dettifoss, as well as Lake Mývatn and the surrounding geothermal highlights. It was at the village of Reykjahlíð, we stopped for lunch at a popular cafe-restaurant. The Plokkfiskur, a combination of flaked white fish and creamy mash potato, served with rye bread, did a fabulous job of setting us up for the remainder of the day. It was so good we intentionally drove by a couple of days later for some more. 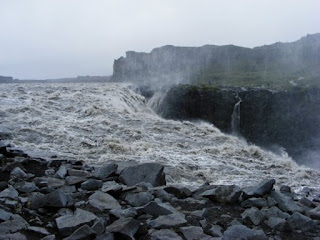 On a subsequent city break, we looked up a favourite haunt, Þrír Frakkar restaurant in the 101 district, Reykjavik. I had seen Plokkfiskur au Gratin on their menu. It did not disappoint, indeed it was sublime. It's their recipe that I pay tribute to here:

Instructions:
1) Boil potatoes (skin off)
2) Boil water, add salt and fish, cover. Turn off heat 8-9 mins.
3) Stand. Remove fish, keep water for stock.
4) Cut potatoes into bite size pieces.
5) Flake the fish
6) In an empty pan, add butter & onion on a medium heat. Simmer until onion turns clear. Sit in flour and gradually thin with stock and milk (ratio 1/3 stock : 2/3 milk) to the consistency of gravy or a good soup.
7) Add the cut potatoes, flaked fish and stir loosely together
8) Salt & pepper, season to taste.
9) For Gratin version, transfer mixture to a oven proof bowl. Add grated cheddar cheese on top and put into hot oven for 15-20 mins. Until cheese is melted and just colouring in the heat.
10) Serve with rye bread. 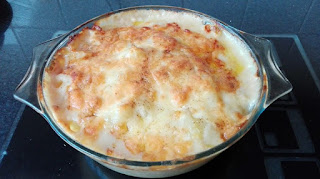 This one came recommended via a review in the Lonely Planet guide. So on our very first trip to Iceland in 2001, we walked through the sleepy backstreets, below the skyward sweeping spire of Hallgrímskirkja. In front, a bronze statue of Leif Erikson looks westward towards his discovery of America, half a millenium before Christopher Columbus. Then along Baldursgata to find Þrír Frakkar. The name, a Icelanic play on words - three Frenchmen, three coats, or something like that, gave an indication of the delightful quirkiness inside. A combination of wood panelling, fishing memorabilia and images of old Reykjavik. The food is most certainly Icelandic, but with a hint of France, perhaps as a doffed hat to the old times when French fleet came into port. 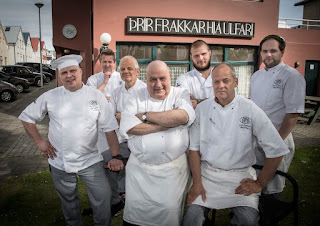 For me Þrír Frakkar, is my all time favourite restaurant. Going back feels like a kind of home coming. A rare and special feeling, outside of the Peak District. I have only savoured elsewhere in East Africa. 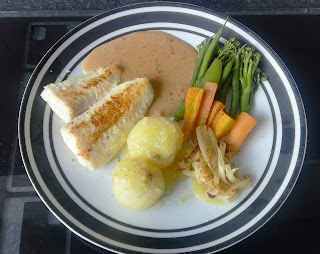 I hope you've enjoyed the verbal gymnastics of Icelandic words. The language is not far removed from Old Norse. You'll no doubt have noticed it has a couple of special characters and accents .
Þ  said as 'th' in thing. Hence Þingvellir, the site of Icelands ancient parliament (and the world's oldest), is Thingvellir
ð  said as 'th' as in the
á  said as 'ow' as in cow
æ  said as “eye”
í  said as 'ee' as in we

Most Icelanders do speak good English. It's taught, along with Danish, at school. However, don't let this stop you having a try. If nothing else it's a great conversation ice breaker (no pun intended) and will no doubt generate some good humoured amusement. It's worth also mentioning that if you're invited into someones house, it's good manners to take your shoes off at the door. If you're fortunate to invite guests to your holiday apartment, it's good from to offer coffee and some sweet pastries.


More Icelandic recipes, stories and reminiscences, to come in Part 2.