An now, to quote Monty Python, for something completely different:

A couple of years ago I attended a Wildlife Camera Operator course run by the Wildeye Film School.
On this particular course, one of the instructors (Jonathan 'Jip' Jones - BBC Life In The Undergrowth, Swarm, Nat Geo Great Migrations) brought the new Photron SA1 high speed camera for us to use (under supervision). At the time there were only about three of these £100,000 cameras in existence and just this one was in the UK.

For such an expensive piece of kit, one might have been a little underwhelmed by its appearance. It was a aluminium box with heat dissipating fins on the sides, military style aerospace connectors on the back and a standard lens mount on the front (lens not included in the price). 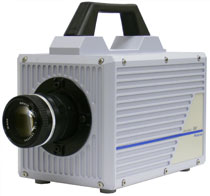 But the magic lay with the technology and processing power within the unit. Modern cameras of this type can capture events such as the shock wave ripple in air following an explosion and slow the action down so that we can view it.

The other great feature is that it continually records and overwrites data so that if the operator is waiting for an event to occur (eg wildlife cameraman Simon King filming great white sharks 'torpedoing' seals off the coast of South Africa) the save 'record' button is pressed after the action has taken place and the sequence is then stored on hard drive memory. This is something that would have been prohibitively expensive in the days when film stock was needed for recording broadcast quality slow motion footage.

On the course we set up various scenes with jumping frogs and the simplicity of popping water ballons demonstrated the camera's capabilities very well.

Until that is, I somehow became the 'volunteer' stuntman for live water ballon experimentation!!!
The results speak for themselves. Stay with it for the 'out takes' at the end!

Link to You Tube:
http://www.youtube.com/watch?v=2Cejq-V3R-8

Footnote: The Wildeye International Wildlife Film School runs a variety of courses from film research, sound recording and camera work, through to the editing and production process. These highly enjoyable courses give access to information and practical skills which are difficult to acquire elsewhere, making them a fast track to producing your own quality films.
http://www.wildeye.co.uk/