This April saw walkers gathering in Edale to celebrate 50 years since the inauguration of the Pennine Way.

It is amazing to think that in this time it has become probably the best known of all the national trails in the UK...And for the past five years the route has hosted a world class winter endurance event, The Spine and Spine Challenger race series.

Inspired by similar trails in USA, particularly the Appalachian,  it was the dream of Tom Stephenson to connect up the various footpaths along the watershed to the Pennine hills running from the Peak District to Kirk Yetholm on the Scottish borders. Originally proposed in 1935, the final section was declared open in a ceremony on Malham Moor on 24th April 1965. 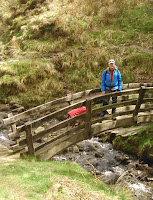 The plans for the scheme were displayed in the Edale Peak Centre for the silver anniversary. It was interesting to note the various proposals as well as subsequent modifications, such as the bad weather route (& now preferred start) across fields to Upper Booth, ascending Jacob's Ladder. The original reason for this change was due to concerns about erosion, but an additional benefit was fewer inexperienced navigators getting lost among the peat hags and trenches of the central Kinder plateau, in the frequent hill fog. 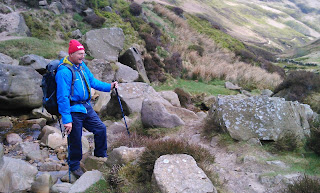 Peter Lowton, myself and Rafa dog from Ranger Expeditions set out from Edale to mark the occasion. Coincidentally, the date also marked 15 years since I broke away from salaried employment into the world of the freelancer. My previous career in the highly regulated aerospace industry culminated in a safety role, investigating non conformance, gathering evidence and ultimately sanctioning equipment as fit for flight use. 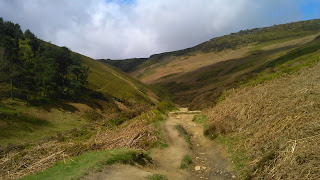 The experience gained has since been of invaluable use in my work as a mountain and expedition leader. Where assessing risk and implementing proportional control measures is an every day part of the role. But this is done in a way which does not detract from the essence of adventure and personal challenge which draws many people to the hills and mountains. Sharing this approach along with quality training, helps clients learn to dynamically assess risk when enjoying their own independent journeys, preventing adventure from becoming mis-adventure.

A drizzley start to the morning soon cleared to bring blue skies and warmth to the Spring day. We headed up Crowden Clough, the original PW route, crossing the brook using a footbridge constructed by local master craftsman Robin Wood MBE. We would pass by Robin's workshop later on, during our descent. His projects include making authentic replica bowls for the Mary Rose museum in Portsmouth, Jorvik Viking Centre and Ridley Scott's 'Robin Hood' among others. 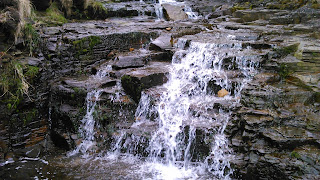 This early in the season, there was still a healthy flow of water off the plateau and so we boulder hopped across the brook several times as we walked and scrambled upwards. We paused for a snack on a grassy patch about the 450m contour and to take in the view. Towards the top steepest section, Rafa's legs were tiring with jumping upwards, so I gave him a hand up with an extra lift on his body harness. 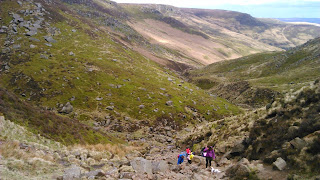 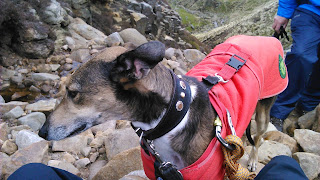 Once at the top he seemed to quickly regain his enthusiasm to be investigating what lay ahead. One chap in  group of passing wakers recognised Rafa and paused to chat. I then recalled meeting him and his septuagenarian friends a few months earlier when they were out on another brisk jaunt over the Kinder. 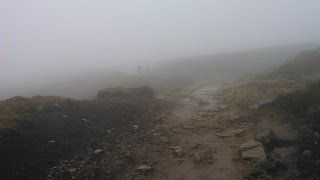 We followed the plateau edge in a clockwise direction, passing Crowden tower, avoiding the southerly diversion to the hill spur above Upper Booth. By this time the clouds were descending and beginning to shroud the hilltop in mist. We were stopped by two silver DofE groups, unsure of their exact position and asking for reassurance that they were still on the right track. In the circumstances, both were within a couple of hundred metres of where they thought they were. But it shows how disorientating hill fog can be to the navigator.

Possibly of greater concern, where the adult groups we had seen earlier in the day. Dressed in t-shirts and shorts and voicing their confusion whilst following the very well defined Crowden Clough in clear visibility. The enjoyment of the hills is there for everyone, but a few hours hill skills training is a wise investment which, along with some basic waterproof gear, does not necessarily need to break the bank. It could mean the difference between a thoroughly enjoyed walk and a call out to the local mountain rescue team. 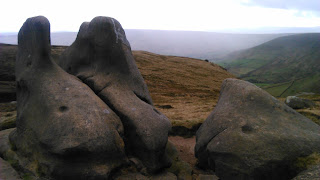 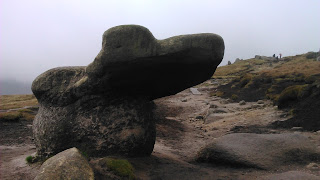 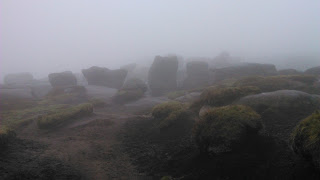 We passed by fascinating rock formations with names such as The Wool Packs, Noe Stool and Pym Chair. Shaped by the last ice age and weathered smooth by wind and rain over millennia. As I approached one collection of rocks, shrouded in the mist, they appeared to me as a circular henge. Having spent time investigating stone age sites from Malta to Orkney, I felt sure the significance would not have been lost on our Neolithic ancestors. 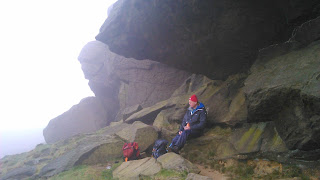 Clouds were now billowing up over the plateau edge and we spotted a dark squall rapidly moving in from the west. I 'double bagged' Rafa with his rain jacket and rapidly pulled on my waterproof trousers just as the first heavy spots splashed on our rucksacks. Sheltering in the lee of a boulder it was soon apparent that this was a prolonged shower as rivulets formed in the gritty sand underfoot. Instead of standing around waiting to get cold, we continued briskly onward.

With a minor deviation we headed directly to Edale Rocks where we tucked into the last of our sandwiches in the shelter of the over arching rocks. We were not far from the Kinder Low bronze age burial mound. People had most likely been using this as a place of refuge for 3500 years, probably a lot longer before that.

Descending Jacob's Ladder, we dropped below the cloud base to see several other groups of walkers now making their way off after their day on the hill. We removed our rain jackets at the pretty packhorse bridge over the River Noe. A couple more kilometers traversing fields, full of sheep with new lambs and Rafa on a short lead, we arrived back at Edale village. 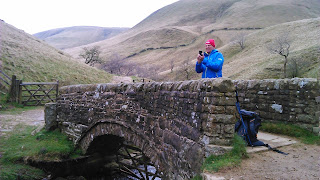 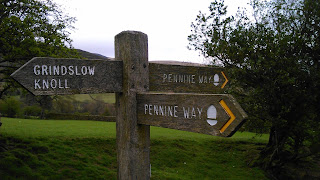 A coffee at the Old Nags Head was in order, as well as a cheeky measure of Lagavulin to celebrate a grand day out. With healthy appetite, a visit to the Edale Wood Fire Pizza Company marked a delicious end to the day. 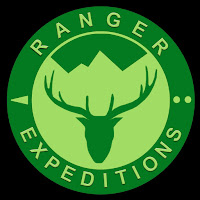 For latest news and courses,
Find us on FACEBOOK: Ranger Expeditions
www.rangerexped.co.uk
rangerexped@hotmail.co.uk
07890 620274