Back in 2014 I conducted a survey into what footwear racers used in the Spine & Challenger Race. The questions I then asked was what they liked about their footwear, what they did not like, and if they were to do the race again what changes they might make to their footwear system (including socks).

The respondents were very generous with their answers. However, with a limited sample size, it was impossible to make all encompassing statements of certainty. Indeed, even if such a thing were possible, this was never the absolute objective of the exercise. More importantly was to find trends and share ideas which would be a useful starting point for future Spiners & Challengers, whether new to the race or looking to make improvements.

Some of the most interesting survey comments were:


This led me to speculate that there might be another strategy: A trail trainer - boot hybrid.
A trawl of the internet yielded few choices which were available to purchase at the time.

The Inov8 Roclite boot was used  to success by some racers in 2014 & 2015. It boasts lightweight construction for running, sticky rubber compound sole for traction on wet rock, high sides for ankle support and Goretex to stave off water ingress through the material of the boot.
It's a worthy contender for a Spine race boot, especially if you tend towards minimalist style footwear. Available at £100 to £130, internet prices.

However, what options are there for racers who prefer something a bit more substantial without going for heavier boots made for hill walkers?

In my work guiding clients, a mountain boot, such as a Scarpa Cristallo, is perfect for the activity. However, for challenge events like the National or Yorkshire 3 Peaks, where pace is faster I found my mountain boots too stiff soled. But my Solomon XA trail trainers were not man enough for the job, especially in poor conditions.

This led me to re-visit the similar issue experienced by Spiners. However I noticed a new kid had appeared on the block: Salomon Wings 2. (The original was previously only available as end of line stock). 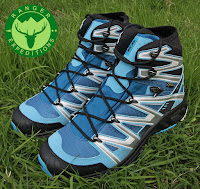 I dithered a couple of weeks before buying because I had read there were Chinese rip-offs of trail shoes on the market. But when the price reduced to a very palatable £99 on Amazon (via  Sports Shoes Unlimited), I thought it was worth a punt.

On receipt of delivery, initial impressions are good. The boots appear to be well made with no loose end stitches. There are stretch gaiters at the heel to help prevent ingress of mud and gravel. Goretex lining adds to the extended season and weather remit of these boots. 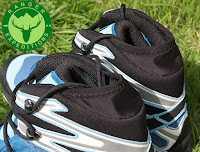 The tread pattern is similar to the low sided Salomon Speedcross. The 2014 survey showed this to be a very popular footwear choice especially for Challengers.


One reservation I have with all Salomon trail shoes is the seemingly inevitable failure at the hinge point in the toe box.

A consequence of pushing the fast and light ethos too far in manufacturing terms, without the material robustness to give the purchaser good value for money.
Time will show whether Salomon have addressed this well documented and reported early failure mode.

I ordered these boot one size too big. This is partially in response to the fact that Salomon footwear tends to come in small, but also my personal preference is to wear a liner and a thicker sock when out in the hills.

The Wings 2 felt comfortable straight out of the box and I was glad of the extra size up. A first short walk confirmed these first impressions and the foot bed has sufficient flex to allow a natural fast cadence.

So the question is, are Salomon Wings 2 worth considering as a Spine Race boot?

At the moment it's too soon to tell. These boots need much more testing in varied conditions. In the coming weeks I shall be doing this and reporting back with updates as to my findings. So stay tuned...

But of course everyone is different and so what is good / or bad for me might be the opposite for the next person.

Those who are familiar with the Ranger Expeditions Complete Racer courses, will know that our training and advice aims to equip racers with the skills and knowledge to build a race strategy which suits them personally.

5 years of working on The Spine Mountain Safety Team has shown that expedition skills and navigation ability are of fundamental importance. Also, with worldwide expedition experience in challenging environments and in personal competition we are the Official Provider for Spine Race 1 to 1 and small group training.

Spine success is built on a a racer's own strength-in-depth of personal multi-day ultra experience and time journeying in the mountains. The winter conditions have often been brutal and kit selection can also make or break a Spine attempt. Everything is connected and to be an good all rounder appears to be a essential factor in success.

The feedback from our Spine clients is that our training has helped enabled them to address weaker skills, focus on efficiency and detailed aspects of their strategy, to turn a previous disappointment into a finish, or journey further into the race than would otherwise have been possible.

For latest news and courses Find us on Facebook
www.rangerexped.co.uk
rangerexped@hotmail.co.uk
07890 620274