Exhibited at Creswell Crags visitor centre is a small fragment of rib bone (species unknown) on to which the image of a horse has been engraved. The artist had certainly studied his subject with anatomical awareness. This object is a remarkable and rare surviving example of upper paleolithic art. The highly polished nature of the bone suggests it had been handled many times, perhaps as a personal possession. 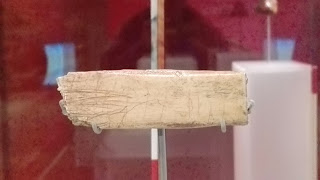 The significance of the image would have been highly relevant to its hunter gatherer owner, quite possibly a totemic or lucky talisman. At some point it was left at the back of the western chamber of the Robin Hood Cave at Creswell Crags. There it lay for 12,500 years until its discovery in 1876.
A series of grooves and vertical lines have scored across the flank of the horse. It has been speculated that these may represent spears. However, in later Neolithic times archaeological evidence shows a practice of putting objects, such as pottery, and spiritual places such as tombs beyond use by smashing or infilling. 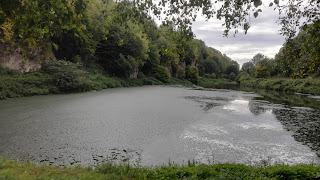 Hence, the scored lines could equally be a precursor of this type of behaviour, essentially marking the end of the totem’s usefulness. Once can imagine this being done during a lean period of hunting, consigned to a spiritual repository within the cave, or simply discarded. 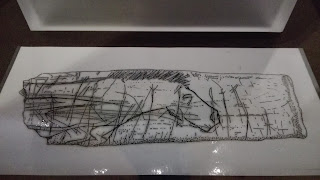 I set out to recreate the paleolithic horse at the same scale as the original. It just over 7 centimetres in length. Not having a convenient animal rib bone, I used a fragment of naturally cast antler which had been bleached from several months of being kept outdoors.

For this first attempt, I was keen to capture the likeness of the image so I used a metal tool. Our paleolithic ancestors would have used finely flaked flint. 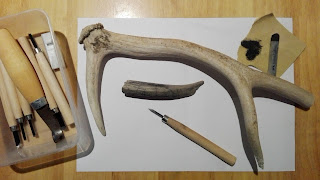 Whilst carving two factors readily came to mind. In slightly subdued tungsten light I found etching the detail extremely hard on the eyes. Half way through, I resorted to using a magnifying glass. The inferences I drew from this was that the paleolithic artist had good eyesight, making him (or her) more likely to be young. Eyesight generally deteriorates with age and certainly, someone in their forties, as I am, would be considered to be long lived in the stone ages. But also as a diurnal species, human eyes have evolved to be most efficient in daylight hours. To carve in this scale and detail just by firelight in a cave would have been a strain on the eyes. 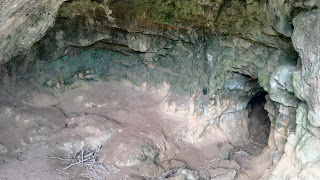 All this suggests an impression of our paleolithic ancestor sitting at the cave entrance in the afternoon, scratching with the fine edge of a microlith flint, absorbed in thoughts of the hunt and with moving images of his quarry guiding his hand. 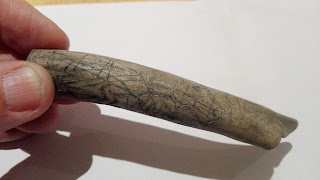 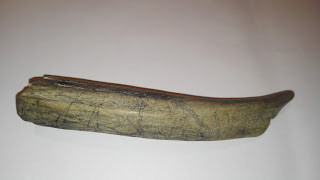 Cresswell Crags remained in use, possibly seasonally, for several thousand years. As well as habitation, it is also a natural kill zone where animals could be funnelled and dispatched with greater ease than in an open area. 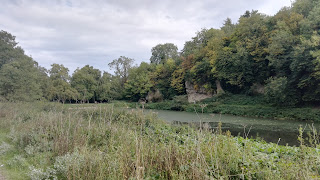 On a quiet midweek, Creswell Crags and the caves hewn into the limestone rock is a superb place to re-imagine these scenes of daily life over ten thousand years ago, when Britain was just emerging from the last great ice age. A few weeks later, I was guiding a group of clients on a walk in the White Peak. Our route took us through several limestone dales and the similarity of the natural features sprang out.

With such a relatively close distance to Creswell Crags with a similar climate and environment I could not dismiss the image of wolf, bear, giant deer and hyaena also roaming in the heart of the Peak District, followed by bands of nomadic hunter gatherers.