Within sight of mainland Orkney and just a twenty minute ferry away, lies the small island of Rousay. With area of just under nineteen square miles, it has such an incredible density of important archaeological sites it has become known at 'the Egypt of the north'. There are no fewer than 15 chambered cairns on the island.

All along the south edge of the island is a string of Neolithic passage and chambered tombs. Many are sited on an ancient geological terrace over looking the waters of Eynhallow Sound. They bask in the glowing etherial light of the winter sun as it tracks low across mainland Orkney and behind the rugged hills of Hoy. None of this would have would have been accidental. Archaeological evidence shows the minds of our Neolithic ancestors where highly attuned to natural cycles and the passing of the seasons. 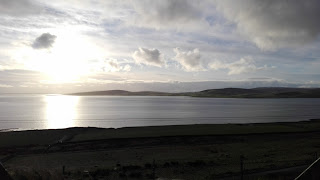 In our "Journeys Into The Stone Age" series of short films we discuss the sophisticated cosmology of the Neolithic and how this displaced the Mesolithic hunter gatherers.

Taversoe Tuick Chambered Cairn
This two storied tomb, dating from 3000BC, is one of only two known Neolithic tombs with two stories. The tomb is built on a hill so each storey can be accessed from ground level. 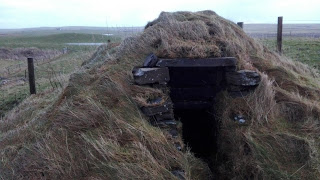 The lower tomb was originally entered by a long passage from the downhill side, leading to a chamber divided into four shelved compartments. 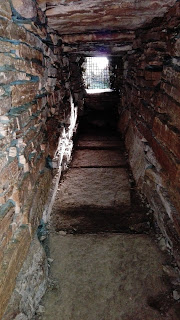 The upper tomb was separate from the lower and different in design. Entered from uphill along a shorter passage into a chamber composed of two rounded compartments. 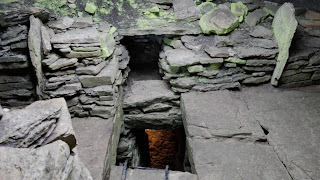 The hatch between the two levels did not exist in pre-history. Archaeological excavations revealed several skeletons in lower level. In the upper chamber there were three cists which have since been removed, containing the cremated bone from a child and at least two adults. There were also many grave goods. 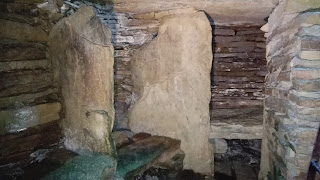 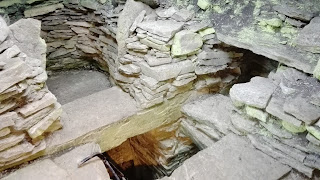 Blackhammer Chambered Cairn
Also dating from around 3000BC, the Blackhammer cairn is just a kilometer away. It is divided into seven compartments, or stalls and is over seven metres in length.
Archaeological investigations revealed two skeletons and animal bone, including birds, with evidence of burning and that the tomb was deliberately blocked when it went out of use. 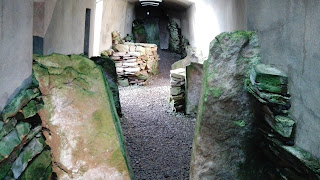 The original three metre passage entrance to the chamber has been replaced by a sliding door with steps down into the once corbel roofed chamber. 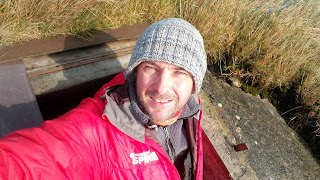 Knowe Of Yarso Stalled Cairn
The Knowe Of Yarso tomb is divided into four compartments and is entered through its original passage. It incorporates decorative slanting stonework, also seen in Blackhammer, which is reminiscent of markings on local Unstan Ware pottery. (We visit the Unstan Tomb on Mainland Orkney, in Neolithic Orkney Part 2  https://www.youtube.com/watch?v=AA9W0peLz5U ) 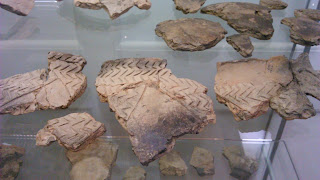 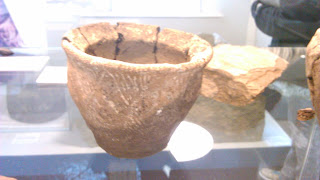 The 1930 excavation revealed 29 human skeletons with skulls set along base of walls. At least 36 deer skeletons were also discovered. To be interred in this way suggests the deer, or what they represented to the Neolithic community, were totemistic, like the dog skeletons at Cuween Hill tomb and the many bones of white tail sea eagles found inside the Isbister Carin on South Ronaldsay, also known as the Tomb Of The Eagles. 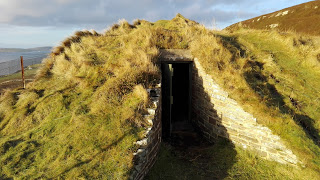 It is very possible that the eagles were part of a excarnation ritual, like a Tibetan sky funeral, before the deceased bones were stored within the tomb. At Wideford Hill the dogs may have served the same purpose. Or their remains kept among human bones may have served a more esoteric purpose. In the case of the dogs, the guardians of the houses of the living now keeping watch over the house of the dead. 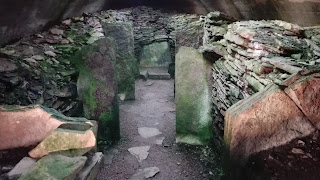 Of course, deer are a herbivore species, so the excarnation explanation fails in this case.  The purpose of interring their bones in The Knowe of Yarso could have represented a spiritual function or offering. Rousay is not a large island and would only have supported a limited herd of deer. 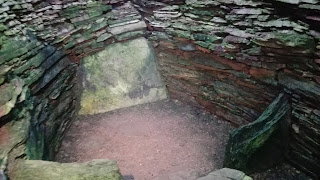 Our Neolithic ancestors living there would have to manage their harvesting of this resource. Indeed, a hard winter with high natural mortality and subsequent low numbers of calves may have had severe consequences for the Rousay tribes, giving rise to treating the bones of dead deer with the same reverence as those of humans.

It is possible that the agricultural activities of the small Neolithic farming communities also interfered with the deers' natural behaviour of descending from high ground to lower pastures in late autumn for the annual rut.

Midhowe Stalled Cairn
At 23 metres, this is the longest stalled cairn in Orkney. It is divided into 12 compartments, many with stone benches and is sited unusually low, right down on the coast. But, given its magnificent size, this decision would have made the tomb's construction much easier as it is next to the sea front, where shelves of flagstone are exposed. The flagstone would have been readily cleaved away, giving building materials within just a few metres of the tomb site. 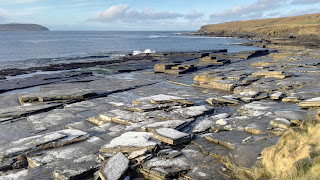 1930's excavations revealed 25 skeletons including two children, some still on the stone benches where they had apparently been laid to rest. Gave goods – pottery and animal bones. The tomb had been back filled with rubble when it went out of use. 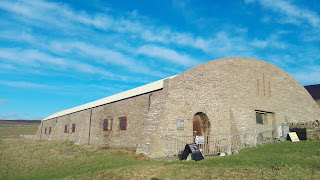 A modern structure has been built over the tomb to preserve it from the Atlantic elements.

I wonder if subsequent Neolithic tribes built and populated each cairn with the dead in chronological sequence. So when a tomb was back-filled and put out of use, the next one was build further along the coast line, but keeping the significance of facing the sea channel and movement of the sun, especially in winter as it remained low in the southern sky during the short days either side of the solstice.

Significant events, such as local exhaustion or near extinction of the red deer population, for instance, could have precipitated a shift in cultural emphasis and the building of a new tomb in the Knowe Of Yarso case.

Or were there several co-existing communities? Each conforming to a general code of funerary practice but with particular cultural identities and idiosyncrasies, which we see in the masonry style and grave goods found in each tomb. These artisan flourishes and expressions of behaviour define the individual and their sense of belonging, it is a fundamentally enduring aspect of the human condition.