Such goes the low echoing tone voice-over of the trailer for the 1983 film Local Hero.

Link to You Tube: Cinematic trailer for Local Hero

By comparison to today's movies Local Hero contains none of the seemingly pre-requisite violence, nudity, special effects or ludicrous story lines. Thirty five years on, its a film which should have faded into obscurity. And yet, it endures and is treasured with heartfelt warmth. 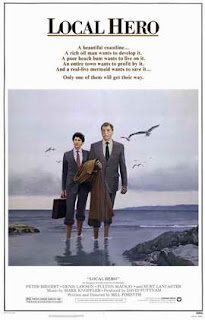 At first glance, the plot is simple enough: Big oil business seeks to exploit pristine environment and buy out resident population of the fictional fishing village of Ferness at the cheapest possible price. Indeed taken in isolation, everything about Local Hero is unassuming. With the exception of Burt Lancaster, the cast at the time could hardly be described as Hollywood icons. Peter Capaldi and Jenny Seagrove would go on to be well respected and award winning names in theatre, film and British drama (Doctor Who, Judge John Deed, Endeavour etc).

The humour is never overplayed, but is none the less funny. Especially with Dennis Lawson's portrayal of Gordon Urquhart as the local factotum who pops up as pub landlord, solicitor and hotel proprietor.

Then there's Mac, played by Peter Riegert, who's task it is to open negotiations for the oil company. But Mac's efforts are thwarted by old man Ben, played by Fulton Mackay (most often remembered for his role as prison warder from British sitcom Porridge). Ben lives on the beach in a shack and is  wholly contented with his simple life. No amount of money that Mac offers can entice Ben to give this up.
To begin with, Mac is all about securing the deal. Its a matter of numbers and what he perceives as winning. This is until the village and its people start to get under his hard business shell. He begins to see them as something more than an obstacle to be overcome with dollars. He starts to care that by selling out, they are on the verge of losing the very things his life is devoid of.

"I want to stay here, run the hotel, do little bits of business. You can go to Houston. Take the Porsche, the house, the job. It's a good life there, Gordon. I pull down 80,000 a year, plus I take over 50,000 in mixed securities. I want you to have it all...And I won't let you down your good name here Gordon.
I'll make a good Gordon, Gordon."

So is Local Hero a film about transformation?

Certainly, yes. But this is like saying The Shawshank Redemption is a film about a prison escape! Shawshank, like Local Hero, is the type of film which draws you back time and again. You know what's going to happen, yet it remains fresh and the emotional journey intensifies with each time of watching.

"I watch this film when I need to go deep"

Jeremy Clarkson as a presenter, Marmite to the British public, once said with surprising profundity for Top Gear...

To create the magic of Local Hero, director Bill Forsyth (who two years previously had delivered the hit Gregory's Girl) chose two main locations on opposite sides of Scotland. The famous red phone box (we'll come back to that later) and Ferness are actually the fishing village of Penan in Aberdeenshire. Whereas the beach, church and hotel interior scenes are around Morar, Mallaig and Arisaig on the west coast.

The first time I tried to locate the location known as Ben's Beach in the film, I ended up at the tourist information office in Mallaig.

"Excuse me, I'm trying to find the beach in a film made locally..."
"Oh you'll be looking for Ben's Beach" the gentleman at the desk said without hesitation in a soft, almost lyrical, accent.
"That's right" I smiled, I'm most definitely not the first visitor to ask this, I thought.
"Three miles down to road, there's the sign for Camusdarach"

In real life Camusdarach is a delight for the senses. On a sunny day the minerals in the white sand reflect the light with illuminating brilliance. Yellow primroses dance in the sea breeze as they hang onto the bedrock reaching out into the water. With your back to the grassy dunes the view sweeps across a turquoise sea to the Cuillins of Skye and islands of Eigg and Rum.

At its northern end, beach can be accessed from a car park behind the dunes. Or if you're staying at the lovely Camusdarach campsite and self-catering cottages, buy a coffee and pan-au-chocolat from reception in the morning and take the private path to where Ben's shack was situated.

Link to: Camusdarach Camping and Cottages

To the right of the beach is a small house. In the film this was given a set dressing to make it into the village Church.

The real church, or more precisely the inside of it, is Our Lady Of The Braes Roman Catholic Church, a few miles east along the A830 at Polnish. It has ceased to be used for worship and for many years has stood unused and neglected. It has now been renovated into a private residence, but can be seen from a lay-by on the road.

A little further along the A830 is the Lochailort Inn where the interior scenes of the hotel were filmed. The inn was extensively refurbished in 2011, but retains the charm of a Scottish lodge with real fire, leather upholstery, elegant tartan fabrics and a warm welcome from the landlady manager.

On my way back to Camusdarach, I pulled over to take a photo of Loch Eilt, somewhere near the camera position for the helicopter sequence at towards the end of the film.


So what is it about Local Hero that resonates with so many people?

Is it Mark Knopfler's soundtrack which weaves a mystical and at times almost mournful thread through the story, ultimately lifting the spirit in the finale, Going Home? A theme tune which he often plays as a encore in his live concerts. Each time I have walked down to the beach I almost subconsciously start to hum the tune. 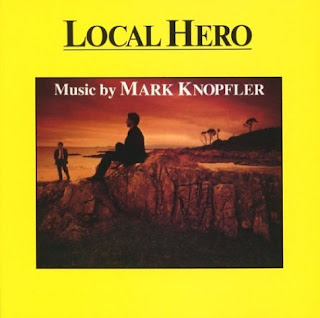 Is Local Hero a film about choices?

Well there's the ending! On the surface it feels like the right things happen to the village and its people. But, we remain with Mac having arrived home to his Houston high rise apartment. Its fitted out with every modern labour saving convenience. The sounds of the metropolis, the city which never sleeps, drift in though the open window. From his coat pocket he retrieves some shells he had collected from Ben's Beach. He lifts them to his nose, smells the sea and connects with the memories.

Something has changed, he is no longer the same person that left before the assignment. He now questions all that he previously held to be true.

Perhaps this is the power of the story. We are left with unanswered questions as the the image fades to black, wondering what is next for Mac. Will he have the courage to complete his transformation? Or will he slip back into what is familiar, safe, the easy option? In the hope that one day the yearning will lessen and that the aching loss of what could have been will fade.

Just when this gentle film has delivered its devastating play.

Bill Forsyth cuts to the red phone box back in Ferness.

You Tube link: Mark Kermode on the enduring love for Local Hero