As summer, such as it was, drew to a sporadic close and the chill of autumn permeated the evening air, I returned to a some of my old haunts, the New Forest, Petworth Park and Kingley Vale National Nature Reserve on the South Downs. I have enjoyed many hours with clients in these special places, guiding walks and sharing navigation skills. In the company of friends and just on my own, the spectacle of ancient oaks, giant redwoods and astonishingly old yew forest in a patchwork of heather moor or rare chalk grassland never fails to bring a deep sense of connection to nature.

In Setthorns New Forest camp on the first night, in the last tired light, I was reacquainted with a favourite wildlife watch as three fallow deer backs started their crepuscular patrol. Their large and heavily palmate antlers serving as a reminder, if such was needed, that the annual fallow rut would soon be upon us. 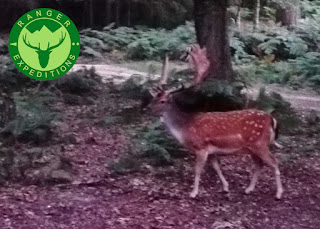 The following morning, on a stroll along the nearby forest trail, the ubiquitous black berries were beginning to ripen. I noticed how at the browse line, there were more pickles on holly leaves than further up the tree. In fact, you don’t need to look too hard anywhere in the forest to see how a large population of fallow and red deer have influenced the vegetation. 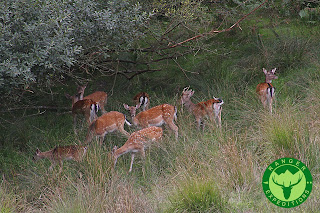 It’s always a pleasure to sit quietly and watch deer as they move, undisturbed, through their woodland home. However, for those with less time, the public deer viewing platform at Boulderwood offers a much easier opportunity which also reduces the disruption to the wider deer population. 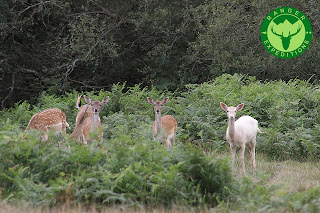 A forest ranger once told me that too many people were crashing through the area and getting too close, looking to take that prize-winning photo. As a consequence, during the rutting season, the New Forest red deer had modified their natural behaviour of returning to their old ‘stands’ and now rutted ‘on the hoof’. 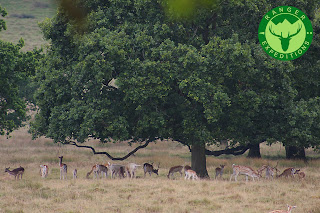 Another of my autumn favourites is Petworth Park. The landscaping features among Capability Brown’s finest work. Grazing the gently rolling contours are a herd of habituated but still very wild fallow deer. It is here I spent a couple of seasons filming my short film Fallow Deer Rut.
Link to Ranger Expeditions Fallow Deer Rut film.

It takes virtually no effort to find the deer, which will disappoint the tracking enthusiasts, but the real pleasure here is to sit and observe some phenomenal behaviours. During filming in 2011, with a long lens I hasten to add, I was treated to some epic battles of powerful bucks fighting for dominance of the lek. The Petworth deer are well managed and so without too much stress, generations of bucks have developed large antlers and seem generally bigger than their free roaming counterparts. 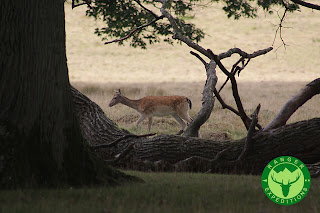 This year, I was aware I would be a little early for the main show, so to speak, but still saw the beginning of the lek formation, bucks assessing the condition of the does as well as mild intolerance of the younger males. 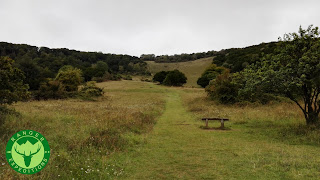 Returning to Kingley Vale has become something of a pilgrimage. Tucked away on the edge of the South Downs, the nature reserve is significantly important mosaic of grassland and ancient yew forest. The yews are some old the oldest living organisms in the United Kingdom. Their survival is remarkable, given that yew was the material of choice for the late medieval English longbow. Archaeological evidence at Kingley includes prehistoric flint mines, bronze age burials and Iron Age settlement. 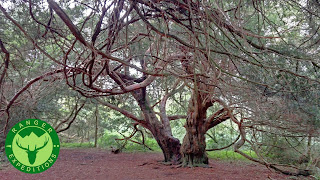 The atmospheric yew forest, leading into a tranquil bowl of chalk grassland and hilltop views which look out towards the sea over alluvium plains, evokes a deep spiritual connection to nature. At one time, much more of our environment was like this. To our ancestors, such a connection would be commonplace, even essential, for survival. My walk through Kingley revealed, at every turn, a delight of autumn colours, berries and fruits of the forest.

Lords-and-ladies (Arum maculatum), also known as cuckoo-pint.
The root, when roasted well, is edible and when ground was once traded under the name of Portland sago. It was used like salep (orchid flour) to make saloop — a drink popular before the introduction of tea or coffee. It was also used as a substitute for arrowroot. But, if prepared incorrectly, it can be highly toxic. 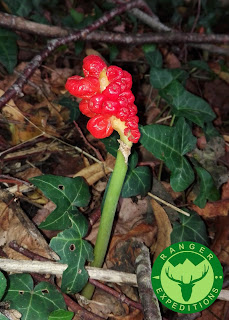 Midland Hawthorn (Crataegus laevigata)
It also makes good charcoal, and has a reputation for burning at high temperatures. The young leaves, flower buds and young flowers are all edible. They can be added to green salads and grated root salads. The developing flower buds are particularly good. The haws can be eaten raw but may cause mild stomach upset. They are most commonly used to make jellies, wines and ketchups. (source: Woodland Trust) 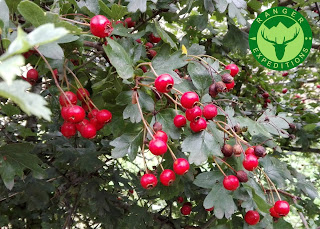 Dogwood (Cornus Sanguinea)
The origin of the name comes from the smooth straight twigs, which were used to make butchers’ skewers. Skewers used to be called 'dags' or 'dogs', so the name means 'skewer wood'. (Source: Woodland Trust) 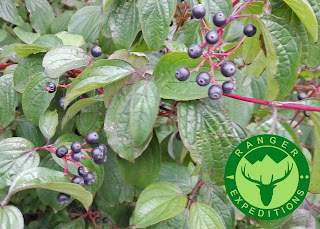 Rosehip
Wild rose hip fruits are particularly rich in vitamin C. Rose hips are commonly used as an herbal tea, often blended with hibiscus, and an oil is also extracted from the seeds. They can also be used to make jam, jelly, marmalade, and rose hip wine. Rose hip soup, "nyponsoppa", is especially popular in Sweden. Rhodomel, a type of mead, is made with rose hips. (picture shows rosehip, growing through hawtorn) 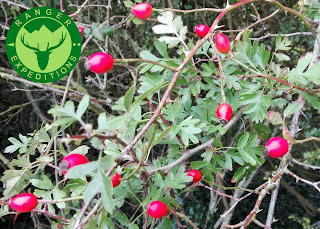 Spindle Tree (Euonymus europaeus) flower
I was so pleased to find this little tree back in flower. I found the species many years ago while working on plant knowledge for the NCFE Bushcraft Award test. The subsequent research and identification was a key moment in my bushcraft journey. European spindle wood is very hard, and can be cut to a sharp point; it was used in the past for making spindles for wool-spinning and for butchers' skewers. 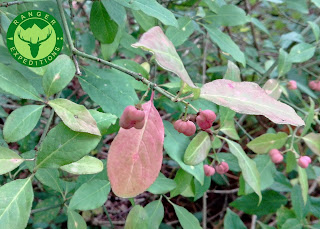 Yew (Taxus baccata) berry
All parts, except the flesh of the berries, contain taxin(e) a complex of alkaloids which is rapidly absorbed. Also present are ephedrine, a cyanogenic glycoside (taxiphyllin) and a volatile oil. Though the berries are harmless, the seed within is highly toxic. (source: The Poison Garden) 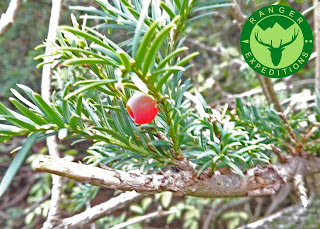 Buckthorn (Rhamnus cathartica)
It was once used as a purgative, which was thought to help rid the body of illness and disease. 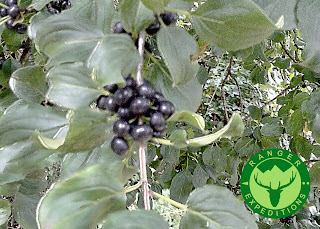 Rowan (Sorbus aucuparia), mountain ash
Rowan berries are edible to humans – they are sour but rich in vitamin C, and can be used to make a jelly to accompany meats. The colour red was considered to be the best colour for fighting evil, and so the rowan, with its bright red berries, has long been associated with magic and witches. Its old Celtic name is 'fid na ndruad', which means wizards' tree (source: Woodland Trust) 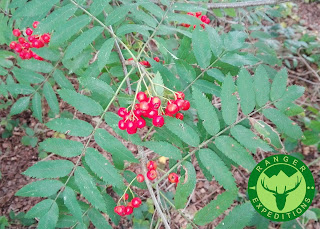 Too soon, it was nearly time to leave this special place. The light was fading to dusk and I had to be elsewhere. Just a few more minutes, I thought, and quietly trod past the tree line into open country. On the grassland, I was downwind of a light breeze, filtering through the surrounding ancient yew watchers. And there she was, as if it was meant to be, just like all those years ago. I froze, still, very still. Oblivious the doe continued her grazing. I turned the focus ring on my camera, slowly raised my arm and clicked two or three frames. 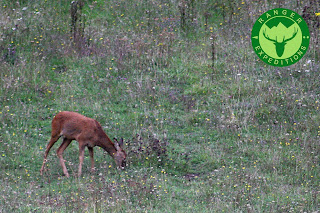 What a delight, she looked so healthy, in her prime, her summer coat bright red like a fox. Roe are widely distributed in the UK but are solitary or paired:  A buck's territory overlapping with one or two females in their rutting season (July & August). Unlike red and fallow deer which are herd species.  I had been extraordinarily lucky this evening for all the elements to come together and be carrying a camera to photograph this shy and flighty species of deer. With an inward smile, I retreated quietly back into the enveloping shadows of the yews.

Happy with my evening adventure, I walked briskly along the gravel trail back to the car park. Then, I couldn’t believe my luck. Another roe on the tree line of the adjacent field. I knew I was spotted way before I saw the deer. I carried on, slowing slightly but not breaking my stride or the obvious cadence of crunch of feet on gravel. I clicked the camera on, paused behind a tree trunk, clicked off a few shots and carried onward. 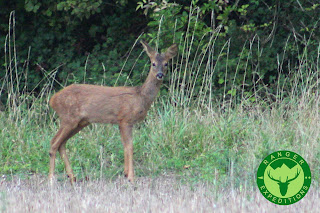 Getting back home to Hayfield, a lingon (also known as cowberry) bush I planted last year in the garden had begun to flourish and offered several berries. Enough to mash with some sugar and make a sweet and sour paste for a small fillet of salmon. 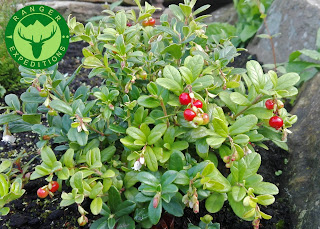 Autumn has always felt like a special time. The crisp early morning and evening sunlight casting particulalry glorious golden and ochre hues. But the show was not yet over. As my thoughts turn to the spectacle of the red deer rut with time out on Big Moor and Chatsworth Park. 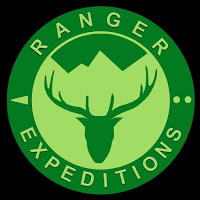