In July 2016, I led my sixth expedition for World Challenge. With many previous visits on safari and trekking, each time I return to East Africa, in particular Tanzania, feels like coming home. But, the south was to be a new experience. In many ways, I found the pace of life easy going. The trekking and safari operations were low key, but no less professional than their counterparts on the Northern Circuit, Mt Meru and Kilimanjaro.

While on the project phase, the team camped in a quiet and picturesque wood bordering the Udzungwe Mountains National Park and adjacent to the Msosa River. During our stay, Victor, the camp manager arranged for us to participate in a day preparing and tasting East African style food. It was a great experience and very beneficial to the team throughout the expedition, in helping us see what is possible to create with just a few fresh ingredients.

We also tasted the fruit of the Baobab tree. High in antioxidants, essential minerals and vitamin C, baobab fruit is being hailed as a 'new' superfood and now being added to cereal bars and smoothies. Traditional uses include, mixing the fruit powder with water and sugar to produce a sherbet like drink.
However, eaten from the husk, it tastes a little astringent and dry.

CARRYING THE FIRE
On arriving in Dar Es Salaam, at the beginning of our expedition, we had to decide what we would be cooking on. Our basic choices were: meths-trangias, gas burners, charcoal burners and open fire. Naturally, every expedition leader has their own preference. I like the open fire option, but did also acquire two medium size charcoal burners in Morogoro town, just in case we were in locations where firewood was scarce. I didn't want to be cutting trees, if they were scarce around camp sites, for the purpose of cooking, as just a few commercial groups can ruin the very beauty of a place they have come to visit. 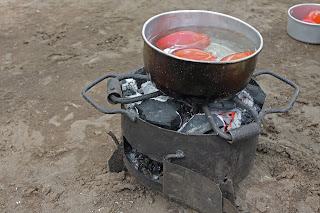 Occasionally, whilst waiting for water to boil in the morning for a Africafe coffee, I wished for the instant heat of a gas burner. Prior to the Mt. Rungwe trek, I had met a World Challenge team who had not enjoyed the best of weather on the trail. However, in the following dry sunny days, the pre-cut timber (the trail led through managed cash crop forest) was drier and easy to light with a 'jungle kit' (fire steel, vaseline and cotton wool product). I had brought a parabolic solar fire starter from the UK, but at the times when it was needed (early morning and late afternoon) the sun's rays were either not strong enough or the campsite was under the forest canopy.

I heard one leader had managed to locate a source of meths in Dar Es Salaam. On some expeditions, the search for this has sometimes taken us on a mythical quest, with the red herring of non-combustible cleaning meths (in similar bottles) causing much frustration. However, it appeared that combustible meths in Tanzania can be found in Pharmacies. 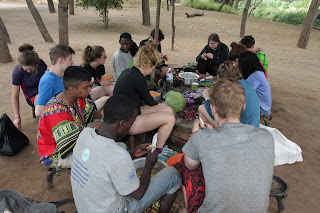 I'm not a big fan of trangias when journeying with large groups, they fragment the team and its difficult to have all the ingredients ready at the same time. This said, there was one time in Rwanda where the team were not following their own cooking / washing up rota. So to defuse the tension, we had a tent group 'masterchef' competition. Each tent group were given a fixed amount of money, had to negotiate and agree with each other use of communal items, then cook a substantial dinner with a sample portion for the School Leader and Expedition Leader.

MEAL 4 - MAIZE or SORGHUM FLOUR (Ugali)
A East African staple. Sticky in consistency so can be shaped into a scoop and eaten from a communal stew pot.

MEAL 5 - BEANS (Maharage) with RICE (Wali) or (Ugali)
These beans look like haricot used in baked beans, and taste similar.
They have to be carefully sorted to remove any gritty stones or spoiled beans.
Preparation time is long, as they need to be boiled for 2 hours.

MEAL 6 - CHIPS OMLETTE (Chipsi Mayai)
A Tanzanian favourite. Simply add fried chips to an omlette mix, as one would with a Spanish omlette. Add masala spices or a little chilli sauce to zip up the flavour as desired.

MEAL 8: AFRICAFE COFFEE
This essential item of kit should never be too far away from the Expedition Leader.
Almost as good as freshly ground, this brew is highly regarded and provides a useful meal replacement when Challengers have resorted to cooking up the dreaded Beanfeast. 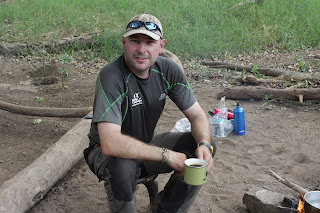 OUTCOMES
Domestic roles in Tanzania are still very much divided along traditional lines in subsistence communities. What our experience of East African cooking showed, especially when putting it all into practice, was the length of time taken to prepare, cook and serve a meal. For a proper dinner, with staple, vegetables and meat, we rarely achieved a time faster than two hours from the point where we created a flame. Without the luxury of running hot water, washing up was another protracted process. Thank goodness the team had a rota, as this task was among the least popular.

One challenger made a insightful comment regarding life in the village. How when one meal had barely finished, it was time to start preparing for the next. Yet, women had to fit in time to look after the little ones, do washing and work in the fields. The challengers' return to the UK was, almost without exception, accompanied by a fresh appreciation of home luxuries. Indeed, some had begun to question how much 'stuff' they actually needed.