The Dog Stone, situated on the slopes of Kinder Scout, near Cluther Rocks. 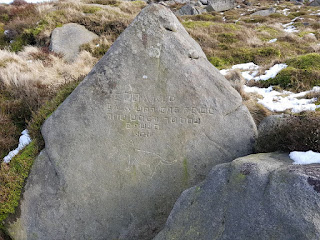 Quern stones found on the site date usage of the grit stone back to at least the Iron Age. Several abandoned round mill stones are also easily found. Taking a moment to view their recumbent pose in the landscape, there was once a day when it was decided that there was no longer a need for them.

Perhaps the mason's foreman brought the message while they were working. The clinking sound of chisel on stone stopped forever. The stonemasons packed their tools away and walked off the hill, calling in at one of Hayfield's many pubs to contemplate how to feed their family while they sought further employment. Or maybe, they assembled one morning at the edge of the village ready to hike up to the quarry, only to be told the news.

The Dog Stone, is a local enigma. It has a cryptic inscription and an etching of a dog's image a few inches across. The form of the dog, with pointed ears, thick tail, strong jaw, and robust frame could be an Alsatian or similar breed. 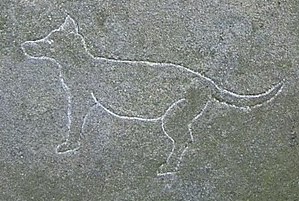 The image of the dog itself could be explained as the idle lunchtime doodle of a stone mason. However the inscription adds a layer of complexity to interpretation. and opens the possibility that the etching is more than a mason's lament to his departed loyal companion. There has been speculation that the Dog Stone dates back to mediaeval times.

The inscription can be decoded using a version of Pigpen Cypher. The earliest forms of Pigpen date back to the 1500's but use only square grids to decode letters. In 1531, German polymath and theologian, Heinrich Cornelius Agrippa, wrote Three Books Of Occult Philosophy in which he describes a cipher which would eventually be called the Rosicrucian cipher.

The Freemasons began to use the Rosicrucian Cipher and then Pigpen. They are perhaps the most famous and prolific users, which is why it is often referred to as the Freemason's Cipher. There are still surviving examples of letters written using the cipher from the 16th Century. It can also be found on Masonic medals, certificates, tokens and gravestones.

Standard (masonic) pigpen decoding of The Dog Stone yields nothing but apparent gibberish.

However, the Grid,X,Grid,X version reveals the following... 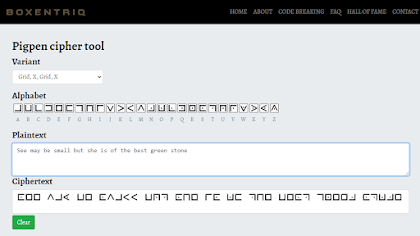 Note the first word. Is this a misspelling of 'she' before the mason corrected the mistake later the encryption? Or, is the word 'see' intentional?

Underneath the Pigpen Cipher is another set of symbols: A linked triangle, square and circle. Other masonic imagery incorporates simplified stylised set square and dividers, combined into a square and bounded by an overlaid circle. Metaphorically, 'squaring the circle'.

Then while I was researching the linked geometric shapes, the following image of a silver ring popped up on Amazon with product description stating: The triangle is symbolic of the concept of time with past, present and future, spirit, the holy trinity, ancient wisdom. The square represents the earth and being stable. The circle represents things that are spiritual and sacred in nature. 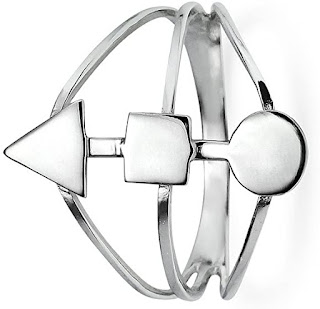 Perhaps then, the mason is expressing his connection to the landscape and its materials. Up on the high shade less slopes of Kinder, in rain, hail and inescapable sun, his life was inextricably bound to the weather and seasons. He may not have experienced this in the liberal terms, which we today think of as spiritual. More likely it was as he gave thanks and honor to his omnipotent God the creator and provider.

There is also a geoache at The Dog Stone. It makes a fun 'target' for navigation training sessions. I've shared the pleasure of finding this special place with many clients, friends and family...a 'Kinder Surprise'. 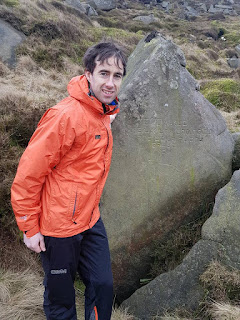 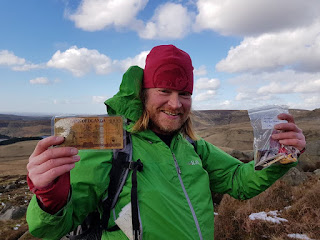 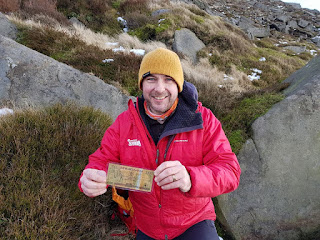 There are other rock markings on Kinder. But none discovered thus far date back to the prehistoric cup and ring symbols of the Neolithic and Bronze Age. 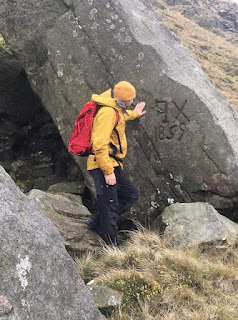 The lesser known incongruous 'Aztec' marks are without precedent in the United Kingdom. Archaeologists consider the image to be old but not ancient.

I was inspired to recreate the Dog Stone on a nice slab of Orcadian sand stone, for my Ancient Stones hand crafted in Hayfield collection. The flat, fine grain surface would take take the etching and the overall proportions were well suited.