In this Part 3 of the Taste Of Iceland series, I contrast two main meals: One for the grown ups. And one for a  family lunch or dinner which the children will find lots of fun to help prepare.

What impressed me about this dish is for the relative simplicity of preparation and with a little 'cheffy' presentation, it really delivers on flavour. This is a good one to offer visiting friends. To be enjoyed and savoured during a relaxed evening dinner with a chilled pinto grigio. The Skyr and salmon connects Iceland farming produce to the traditions of sea. Adding a garnish of samphire gives a briny estuary taste, inviting the diner to breathe in, as if walking along the shoreline. 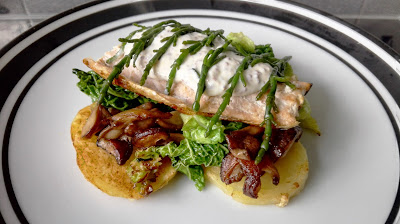 I first experienced the delight of trout burgers, when served from an old American vintage style school bus at the campsite below the rainbow coloured rhyolite cliffs of Landmannalaugar. The bus was most likely originally shipped over for use at the Keflavik US NATO base. The base itself was substantially decommissioned in 2006. Visually, at least, Keflavik is all the better for it.

A military airstrip was established at Keflavik in World War 2 to help protect the north Atlantic air routes and the strategic position of Iceland itself from Third Reich invasion. During the Cold War, Keflavik was an important reconnaissance and monitoring location against the Warsaw Pact threat..

On my first visit to Iceland, a 30th birthday surprise from Dolores, we were on a guided tour which passed by Keflavik. The tour guide was a friendly, distinguished, gentleman in his 80's who was intensely proud of his country. But when we passed the US airbase, with ragged strips of wind blown polythene and rubbish caught up all along the perimeter fence, he expressed embarrassment. The litter was jarringly incongruous compared with the surrounding pristine lava fields, scrupulously clean Reykjavik and actually everywhere else in Iceland.

One outstanding perception of every Scandinavian country I have visited (Iceland, Norway, Denmark, The Faroes) is the conspicuous absence of litter, general cleanliness and love of country.

After the disgusting mess left for other people to clean up, both during and after Summer 2020 Covid lockdown, its a lesson which many people in the UK could take on board. It beggars belief that so many people have so little self respect to leave a trail of discarded trash in their own wake. All those years of Keep Britain Tidy campaigns came to nothing. 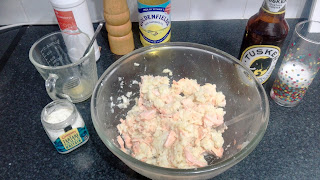 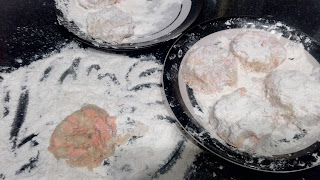 1) Poach trout in frying pan with milk, stock and onion. Simmer 5 mins
2) Lift fish out of pan and set aside.
3) Strain stock through sieve into bowl. Set aside poached onion. Save the liquid for a different dish, e.g. fiskesupa
4) In a large bowl, add mash potato, stir in tartare sauce, egg and breadcrumbs. Flake trout into mixture, add onion. Fold and season.
5) Divide mixture into 8, shape into burgers. Coat each in flour. Put in fridge to firm up.
6) Heat oil, fry for 10 minutes, turn once.
7) Serve in bun, with mayo/tartare sauce and salad (I didn't have any salad left in the fridge, so instead  I fried some mushrooms alongside the trout burgers) 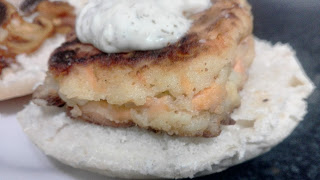 An Icelandic version of Blueberries and cream.

Ingredients:
As simple as it gets, bilberries gently mixed into plain skyr. The bilberry season in Iceland and the UK is relatively short in August with some berries lingering into September. Maybe even October, as I've seen as few patches of escapees from the birds and sheep on the moors around Hayfield. They're prolific in the Icelandic West Fjords and uplands of the UK. 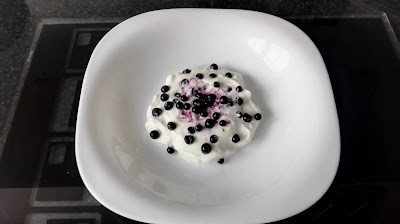